Tougher sanctions for employers and businesses that don’t comply with the new standards.

1 April 2016 legislation changes will strengthen the enforcement of standards with a particular focus on:

The measures target the worst transgressions of employers without imposing unnecessary compliance costs on employers in general. They include:

What you need to know

The new legislation beefs up the range of actions that labour inspectors can take against employers who fail to meet their obligations.

The key requirement in the new legislation is that employers can produce a record of the number of hours worked each day in a pay period, and the pay for those hours, in an easily accessible form on request from an employee or from a labour inspector. Employers will have flexibility as to what form this record takes.

Good record keeping protects the employer in the case of a dispute and ensures that an employee’s entitlements are correctly met.

From April, Labour inspectors will have the power to issue infringement notices for clear-cut breaches of their employment standards obligations, reducing the need to take proceedings to the Employment Relations Authority or Employment Court. The infringement fine level is a set $1,000, with a cap of $20,000 in a 3 month period if there are multiple breaches.

From April, more employment standards cases, particularly those that involve more serious and systemic and intentional breaches of employment standards, will be resolved at the Employment Relations Authority or Court, rather than being automatically directed to mediation services in the first instance, as has been the case in the past. 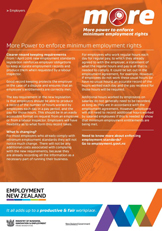