New Zealand public holiday and anniversary dates from 2021 to 2024.

The following dates have been put together in good faith from information provided; we can’t guarantee accuracy.

You can get school holiday dates from the Ministry of Education (external link) .

Provincial Anniversary days are generally observed on the Monday nearest to the actual day with exceptions listed below.

The Holidays Act 2003 lists the holidays, but does not generally set dates for them. Some holidays are set by legislation (eg Waitangi Day Act 1976, ANZAC Day Act 1966, Sovereigns Birthday Observance Act 1952), while others are religious holidays (Easter and Christmas).

Provincial Anniversary Days are observed locally by custom and practice, and are generally prescribed by regional or city councils. You can confirm dates with organisations such as church dioceses, local city and provincial councils, other government departments and business organisations. These provinces relate to the former Provinces of 19th Century New Zealand and are not related to or determined by present-day Districts or Regions.

New Zealand public holiday and anniversary dates for 2010 to 2020. 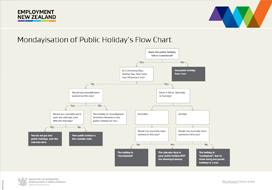