Eligible employees can take paid bereavement leave if someone close to them dies, or for a miscarriage or stillbirth.

Leave and holiday entitlements during COVID-19

Bereavement leave gives an employee time to grieve and to take care of matters to do with the bereavement. This can be taken at any time and for any purpose relating to the bereavement. It does not have to be taken straight away or on consecutive days.

Employers often agree to giving employees additional bereavement leave above the minimum entitlement, depending on the circumstances. For example, if a funeral is being held a long distance away.

All employees (permanent, fixed-term, part-time and casual) can use bereavement leave if:

Employees should tell their employer as soon as possible when they have a bereavement they want to take leave for.

Each employee gets bereavement leave for a minimum of three days per bereavement in the following circumstances:

Each employee gets bereavement leave for a minimum of one day per bereavement if another person dies and their employer accepts they’ve had a bereavement. This is based on:

Tane is entitled to three days’ paid bereavement leave when his grandmother dies. He takes two days straight away to attend her tangi. A year later, he takes a day’s paid leave to attend the unveiling of his grandmother’s headstone.

Ngaire takes two days’ paid bereavement leave when her sister dies after a long illness. Over the next few weeks, she takes two more half days of paid leave to talk to the lawyer about settling the details of her sister’s will.

Work out if you qualify 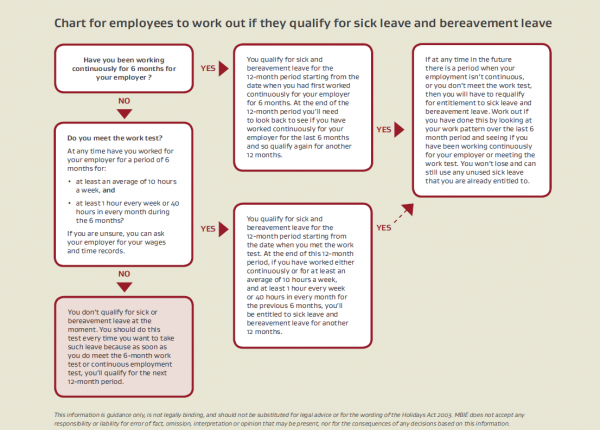 If an employee doesn't quality for, or wants extra, bereavement leave

then their employer can agree that the employee can take:

The law is silent about proof of bereavement. This means that requesting proof cannot be a condition for the employee taking bereavement leave.

The employer is not prohibited from requesting proof, either. So the concept of good faith would apply. This requires both the employer and the employee to be responsive and communicate, and not mislead or deceive each other.

If the employee would have worked on a public holiday but has a bereavement, the day would be treated as a paid, unworked public holiday. Therefore:

If the employee is: