A state of local emergency has been announced for specific regions across New Zealand. Find out more about employment during and after a disaster or emergency.

An employee can take leave without pay if their employer agrees. The agreement should be recorded in writing.

Home > Leave and holidays > Other types of leave > Leave without pay

Leave and holiday entitlements during COVID-19

Employees aren’t entitled to take leave without pay; they can only take it if their employer agrees. This agreement could be contained in their employment agreement, or could be negotiated by the employee and employer at the time leave is taken.

An employer might consider agreeing to a period of leave without pay, for example:

If the employee takes time off work without the employer’s agreement, this is unauthorised leave and could result in a disciplinary process being taken.

Annual closedowns has information on what happens if an organisation has an annual closedown period, and an employee doesn’t have enough annual holidays to cover the closedown.

Taking more than one week

If an employee takes a continuous period of leave without pay for more than one week (not including unpaid sick or unpaid bereavement leave):

The following year Oliver wants to take leave without pay for another two weeks. Michael decides to ask him if he wants his anniversary date for annual holidays to stay the same this time. Oliver is grateful for this and agrees. Oliver and Michael record their agreement in writing so that there are no misunderstandings. When Oliver takes annual holidays a few months later, Michael must calculate Oliver’s average weekly earnings by dividing his gross earnings by 51 not 52 (because he agreed not to move Oliver’s anniversary date for annual holidays).

Calculating annual holiday payments has more information about this.

However in some situations the employee may be entitled to paid public holidays or bereavement leave during a period of leave without pay so the principles of working out whether the day is an otherwise working day for the employee should always be followed.

Clarifying and recording leave without pay 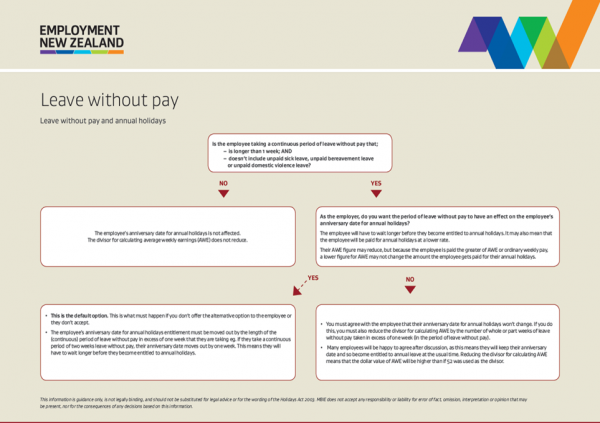